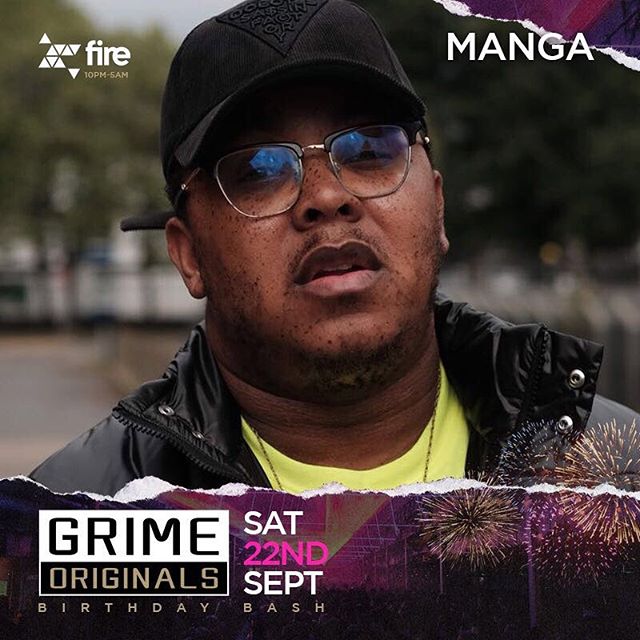 Manga, a master of metaphor, a samurai wielding beast armed with a bag of bars, containing the power to unnerve the most confident of veterans and the influx of new generation MC’s and rappers. Whether Manga is slewin and lickin’ off hed tops on the PHENOMENAL opening track ‘Outsiders’ from our album of 2017 ‘Outbursts From The Outskirts’, or showing love to the gal-dem on the uplifting ‘God Save The Queens’; Manga is a force to be reckoned with, leaving a crater sized impact on any riddim he decides to attack. Manga has been mangling riddims beyond recognition since 2004 as part of the prestigious and pioneering Grime crew ‘Roll Deep.’

In recent years Manga has been rollin’ solo and has emerged from the 12 deep crew as a lyrical samurai slayer on the mic, who has mastered the balance of being part of a prolific crew and a standout, highly respected solo Grime MC, whose versatility and creativity has seen him attain the rare combination of relevancy and longevity that only a handful of artists’ manage to acquire. It was my absolute pleasure to interview the man himself about his journey so far and what exactly drives him to stay motivated and consistent. Find out what Manga had to say below!

Dine on grime, Cammy: Hey Manga! Great to finally meet you, Now then you haven’t got your white jean suit on? *Manga laughs in surprise* but do you have that ‘White jean suit’ confidence tonight?

Manga: You see White jean suit confidence yeah, I was in a club in Dalston, I can’t remember what the club was called but there was a guy yeah, in the middle of the dance floor dancing by himself in a full white jean suit and I was like RAH he’s the most confident person in the dance and that’s why I named my EP after that. So I don’t have the actual jean suit, but I embody that confidence.

Dine on Grime, Cammy: ha ha ha ha that is sick! Did you go up to him and say ‘BMT you’re sick bro steppin’ out in your white jean suit?’ *Cannot stop laughing at the image forming in my mind from Manga’s description*

Manga: You know what’s mad I didn’t go up to him, nah I didn’t still, but I was just lookin’ still.

Cammy: Did Sharky (Major) ask you personally to join the Grime Originals line up and what was your reaction?

Manga: I said yeah where’s the money cuz! *both burst into laughter* nah nah he just wanted me innit and of course I’m gonna do it that’s my brother man, that’s family, but I still want my money please! *laughs*

Cammy: How does it feel to share the Grime originals stage with other pioneers like yourself, such as Wiley, D Double E, Sharky and Ghetts?

Manga: Erm yeah obviously its good man cos that’s who I grew up listening to and now I get to do the same ting, so I’m very happy.

Cammy: You say people you’ve grown up listening to, but you’ve been on this since 2004, do you realise you’re a veteran yourself?

Cammy: Have you got any greys then? Are they starting to come through now?

Manga: Nah nah nah, hold on a minute, none of that, *smiles* I’m the youngest of them, I’m the youngest of the elders, even before I joined Roll deep that was my favourite crew so I did grow up listening to them before I joined them and even now I’m in the crew and doin’ the same ting it’s still a privilege, d’ya know what I mean, it doesn’t go away it’s still there.

Cammy: How did you come to join Roll Deep?

Manga: I met Wiley and then one day he rang me up, a couple of months after I met him, saying he liked my vibe and said – join Roll Deep, and that was it, long story short.

Cammy: When you’re on stage are you competitive against the other MC’s to see who can get the most reloads, or is it more like celebrating the music and culture with your boys?

Manga: Well, it’s celebrating, but at the same time I wanna be the best, so I wanna lick arf everybody’s head back, like the other day we were doing a showcase with Flowdan and we clash on there and obviously we’re all friends but we all wanna win too. We wanna win, we do.

Cammy: What Grime riddim makes you have spontaneous outbursts, do you like what I did there, taking the title of your album? (Manga chuckles.) So what makes you have that outburst, when you hear that riddim drop and you just lose it?

Cammy: How important do you think an event like Grime Originals is in today’s current Grime scene?

Cammy: Apart from yourself which other MC’s slew on the Grime originals stage? (Randomly asks as it pops into my head) oh by the way is Lewi B with you tonight actually?

Manga: No Lewi B isn’t here tonight, but I’d say the MC that slews is Discarda, he slews everything every single time, he’s here tonight, he was on the same set as me.

Cammy: I really need to know, are you and Lewi B going to do another project together?

Manga: Yeah yeah we will within the next year, I’ve started it, it’s in the works.

Cammy: So as you know I rated your album ‘Outbursts From The Outskirts’ album of the year 2017, and it really is one of my favourite albums, I listen to it all the time and was blasting it while I was getting ready for tonight…

Manga: Thank you so much, thank you.

Cammy: …I definitely relate to it because I feel like an outsider, obviously living up North for time and then travelling to London frequently for the past 20 plus years due to having family down here, so when you spit your lyrics about being an outsider I get it, completely. How does it feel for you to now get the attention and respect for your artistry and skill? At the time that you made ‘Outbursts from the outskirts’ you felt like an outsider but now you are being fully embraced, how does that feel?

Manga: I’m happy that it’s connected with people and they live with it and I’m just happy that people listen to it every day and vibe with it and take it on board, d’ya know what I mean.

Cammy: What is your message to anyone who feels like they are not getting the credit they deserve when they are working so hard and failing to get the recognition?

Manga: Ok so Boom! In life it doesn’t always work simple, just ‘cos you do something and you feel like you should get somethin’ it doesn’t always work out that way so just keep doin what you do, and all of the effort will mean it gets to the point where you can’t be denied, because all of your setbacks will up your skill, n’aw mean. The fact that I didn’t just get breaded straight away and everyone just loved me, meant I didn’t get too comfortable I felt I always had something to prove which upped my skill level, upped my work rate and made me think differently; which now will hopefully set me apart from everyone else.

Cammy: Following on from that, you say you worked hard and you felt like you had to prove yourself and I’m surprised at that because you came from one of the most, if not THE most recognisable grime crew. Roll Deep are legendary, so why would you have to prove yourself?

Manga: Cos it don’t work like that, just because…ok say you go and work at Next (department store) you don’t suddenly own next, you’re not the manager, you’re not the supervisor, you have to start and do your work. You just go in, be yourself, and work hard and hopefully the rewards will come; so just because I was part of that group, well I AM in that crew, we’re family, but yeah it doesn’t mean that everyone should just like me, you have to prove yourself.

Cammy: Ok, that’s really interesting. I have a fan question for you now coming from Hinesh from Manchester who has supported you for the last 12 years. Big ups to my G Hinesh! He would like to know, how did you come across Astroid boys, especially as they are Welsh?

Manga: They were filming something for Channel 4 in the same building as my studio in Bethnal Green but it’s not there anymore…

Cammy: Where is your studio now?

Manga: It’s in my bedroom, they knocked down the other one so I had to move it to my house.

Cammy: Oh ok ok creating in comfort, I like!

Manga: ha ha yeah yeah, so they (Astroid boys) were filming something and they were being very loud, so I came outside to see who it was making all that noise and it was them, so we got speakin’ and then they showed me their music in the studio and from there we just linked up and that was it.

Cammy: Manga honestly, THANK YOU so much for taking the time to speak with me, I’m not gonna lie I feel a little bit emosh right now as I am a huge fan, keep doing what you’re doing, your album means a lot to me.

Manga: No worries man any time. *After hugs and pics we said our goodbyes to carry on skankin’!* 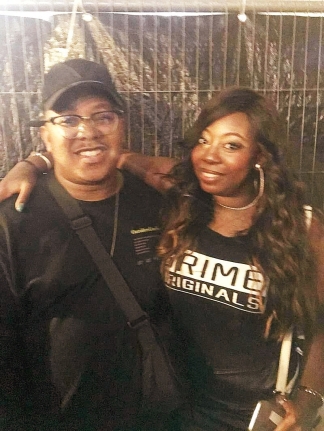