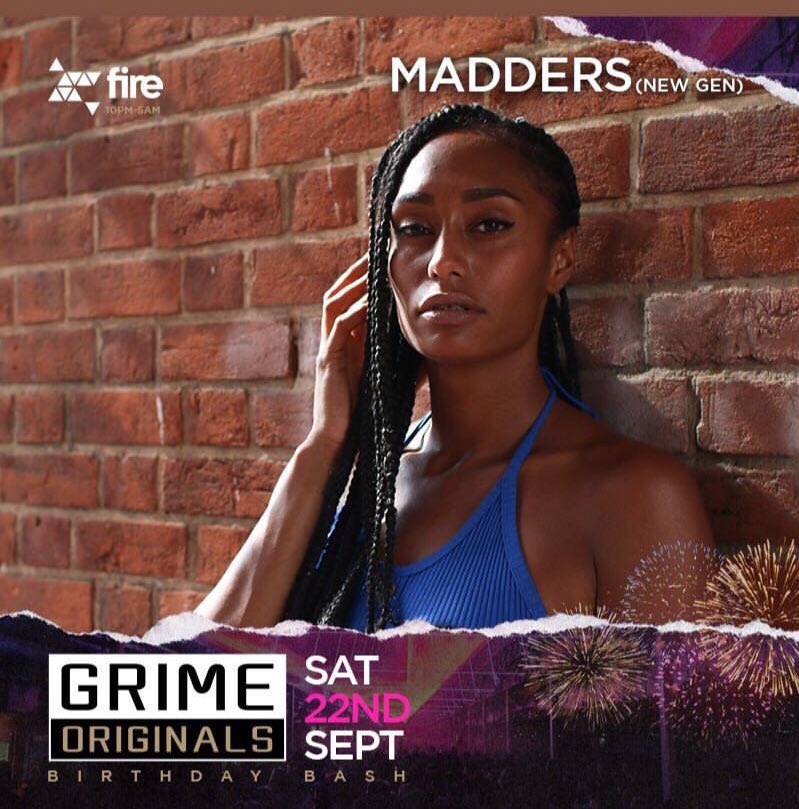 If the title of Madders Tiff recent EP ‘Madders On The Block’ is anything to go by, the madness on her block is down to her being on absolute bits this year and having a busy block to pattern! This year alone she has worked with some of the Grime’s powerhouse producers including Wiley on ‘Underdog’, Rude Kid on ‘Raindrops’ and Preditah on the single ‘Chief’; released earlier this year. Evidently Madders Tiff has the pulling power to attract the most respected producer’s in the game due to her talent, defiance and resilience, along with her ability to flow over hyper bpm’s and deliver stinging pars (Those slippers were Grim! We all remember!!)  has been proven multiple times, but it’s also her ability to flip it and switch it to tackle issues largely considered taboo over earth shattering beats that make her unique to the Grime genre. Madders’ is an MC who cares about the world around her and attempts to raise awareness on the subjects some would rather avoid.

Madders Tiff has seen her popularity rise on a steady incline over the last 5 years, her hard work and creativity which is often envisioned with her friend and in-house director Shan Brown, saw her become one of the first MC’s invited to perform at the houses of parliament, which could very well have been the inspiration for her pointed questions to PM Theresa May on the powerful track; ‘Listen.’ As well as addressing the unravelling politics of the UK and boldly calling out Theresa May’s lack of action, in response to knife crime,  Madders’ also displays humanity, as she bares her soul on her personal struggles with mental health and her journey to overcome them on the track ‘Raindrops.’ I Caught up with Madders Tiff after her performance on the Grime Originals new gen. Set to gain more insight into how she’s bossing it on the block!

Dine on Grime / Cammy: Hey Madders’ great to meet you! So, What was it about Grime in particular that grabbed you and made you fall in love with it?

I fell in love with the authenticity, growing up on an estate in North London, I could relate to the bars and lifestyle really.

Cammy: What does Grime mean to you?

It means a lot. Ever since I was a young girl in school, I was writing lyrics and In the school playground you could find me clashing someone. I feel it just gave me the opportunity to be myself, and not care what people thought because it was real, and that was that.

Cammy: In your opinion why do people like to say “Grime is dead” every few years, when the frequency of new content is constant?

Things change, people change, therefore as a scene we just need to keep being creative with the individual styles and keep pushing. People always chat shit, it’s just one of them things.

Cammy: Why is it important to have an event like Grime originals in today’s current scene?

It gives newer and older artists a chance to be heard, every event, it gets bigger and bigger. Grime definitely is not dead. Big up Sharky!

Cammy: What made you want to address Theresa May directly on your opening EP track; ‘Listen (For Theresa May)?’

She’s not doing her job properly. She really should listen to the youth because they are the future. She needs to allow the dancing too!!

Cammy: ‘Raindrops’ and ‘In The End’ are deeply personal. Were you scared about opening up that part of yourself to the public? What type of impact did you hope the tracks would make on the listener?

I was a bit nervous writing those songs, but it’s kind of like therapy. You can’t keep emotions & experiences bottled up inside, or you will explode. I know so many people are suffering in silence, i just wanted people to know that they’re not on their own. Whatever I learn about how to better myself, I’ll always put it in a song to inspire and hopefully make a change. It’s important to know whatever hard times you’re going through right now, you will get through them; just believe in yourself.

Cammy:  How is it for you as a female Grime artist in a male dominated scene?

It’s cool to be honest, I just do my thing I’m not bothered about anyone else.

Cammy: How do you see the future of Grime music?

It’s gonna be sick, look at the new generation right now, we’re out here making moves. Also everyone has their own style so there’s always new exciting music floating about just like my new song with J-Fresh ‘Oh My’ which is out on all digital Platforms, Don’t forget to check the video out on GRM Daily too.

And with that said,  make sure you check the video below!

*DOWNLOAD* Madders Tiff hard-hitting yet vulnerable EP ‘Madders on the block’ below!